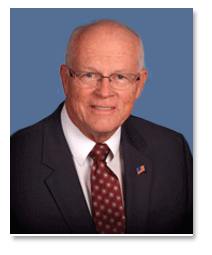 Biography:
Roy Terry attended Western Maryland College (now McDaniel College) where he graduated in 1963 with a Bachelor’s Degree in Science. He went on to receive his Master’s in Education from Colorado State University in 1968. Roy has spent his entire career in education, beginning as a teacher and coach in Baltimore, Maryland. His last 44 years have been spent here in Collier County where he has served as a teacher, coach, athletic director, assistant principal, principal, and finally, Collier County School Board Member.

In addition to his service in education, Roy has remained active in the community.  As a past member of First United Methodist Church, Roy helped plan, design, and supervise the construction of Cornerstone United Methodist Church. He has contributed as Chairman of the Mayor’s Prayer Breakfast, President of Naples Babe Ruth Baseball, Founder and President of Collier County Coaches Association, President of the Rotary Club of Immokalee, member of the Foundation for a Drug Free Generation, and committee member for the Naples Hospice Larry Bird Golf Tournament. He has served on the board of the YMCA of Collier County, Collier County Education Foundation, South Florida Center for Educational Leadership, and Florida School Boards Association (FSBA) as the District 6 Representative.

During his career, Roy received numerous Coach of the Year Awards in both baseball and football. In 2001, he received the honor of District Principal of the Year and was nominated for State Principal of the Year. In 2007, he was recognized by Collier Building Industry Association (CBIA) for his contributions to the building industry, and most recently, Roy was recognized by the National Football Foundation & College Hall of Fame for contributions to the sport.

Roy has been married to his wife, Helen, for 59 years. They have two children, both graduates of Naples High School. They also have four grandchildren, the oldest of which graduated from Palmetto Ridge High School, and one great-grandchild. Roy and Helen are active parishioners of Cornerstone United Methodist Church.
Facebook Flickr Instagram RSS LinkedIn TV Twitter Google+ YouTube
SOCIAL MEDIA
Copyright © 2002-2022 Blackboard, Inc. All rights reserved.