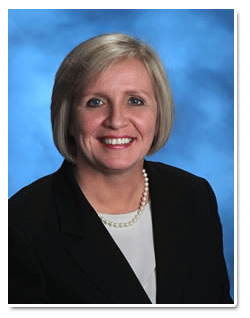 Kamela Patton is in her twelfth year as Superintendent of Collier County Public Schools (CCPS). She joined the district in June of 2011.

During the last eleven years, Dr. Patton has enhanced existing programs, instituted new technological tools, improved internal and external communications, and initiated new programs that resulted in a direct increase in student achievement. Under Dr. Patton’s direction, CCPS has improved its district ranking to tie for 5th in the State from 33rd just ten-eleven years ago. This success is clearly seen in the number of students that have increased their performance on state tests. The district graduation rate has risen significantly to 92.7% in 2021 from 72.5% in 2011, an increase of 20.2%. The percentage of students exceeding the state average has skyrocketed to 100% in 2021 and 2022 from 30% in 2011. CCPS has focused on increasing programming and increasing academic achievement simultaneously for all students.

While academic success is the key focus of the school district, under Dr. Patton’s leadership, the district plans to be debt-free within 4 years, a time period that includes building a new high school and saving $41 million of interest.

As part of the new three-year strategic plan created under Dr. Patton’s direction, the school district is focused on preparing students to be College, Career, and Life Ready. This will be accomplished through an emphasis on academics, culture, and leadership while also highlighting the importance of a high-quality staff with a strong succession management plan, fiscal responsibility, and communication.

Over the past ten-eleven years, Dr. Patton has received a number of accolades and awards. Most recently, Dr. Patton was recognized as the Florida Association of District School Superintendents (FADSS) as the Superintendent of the Year and one of four finalists for the National Superintendent of the Year for AASA – The School Superintendents Association. She also received the 2021 Naples Daily News Outstanding Citizen of the Year, 50 Florida Influencers, Naples Top 100 Distinction (2019 and 2020), Americans United Annual Civic Award, Leadership Collier Distinguished Alumni Award, Naples Illustrated Top 100, Excellence in Civic Leadership Award, the 2018 Lavan Dukes District Data Leader of the Year Award, the 2018 National Association for the Advancement of Colored People (NAACP) Distinguished Leader Award, the 2018 Florida Music Education Association (FMEA) Superintendent of the Year Award, and received the prestigious honor of being the 2017 Star Superintendent from the Consortium of Florida Education Foundations. Additionally, she was named one of Naples Illustrated 20 Leading Ladies of Naples along with being named a 2017 Gulfshore Life Magazine Men and Women of the Year honoree, as well as being recognized as a Woman of Distinction in History for Diversity and an eSchool Learning National Tech-Savvy Superintendent Award Winner. She is the recipient of the Salvation Army Partners in Mission Award, the Boys & Girls Club Paragon Award, the Distinguished Alumni Achievement Award from Messiah University, and the Sunshine State School Public Relations Association (SUNSPRA) Outstanding Superintendent Communicator Award. Dr. Patton was named by Gulfshore Business as one of the 41 People with the Most Clout in Southwest Florida and a Power Woman by Florida Weekly magazine. She is a member of numerous local boards and a graduate of Leadership Florida, Leadership Collier, and the FBI Citizens Academy.